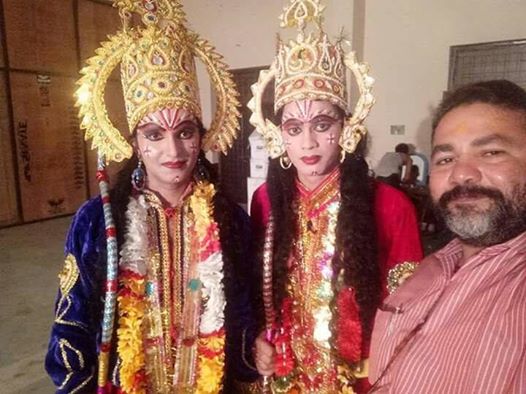 Ramlila at once brings into mind vivid pictures of painted faces, rich costumes, masks, lights, music, and dance. Basically full-fledged entertainment! It also brings along those lovely childhood memories when a Ramlila organized in the locality would be the most exciting happening of our life.

It reminds of those days, when daily chores would be quickly dealt with before dusk, so that no scene of the parody is missed. When families would sit huddled together and applaud at every chest-thumping dialogue of Lord Hanumana. When being chosen as a part of ‘vaanar sena’ would elicit utmost reverence from friends. When Dussehra would be eagerly awaited, for the simple reason that it would be Ramlila time once again!

It is said that the great saint Goswami Tulsidas started the tradition of Ramlila in the sixteenth century. The word ‘Ramlila’ meaning the story of Ram, is a dramatic adaptation of Tulsidas’ Ramcharitmanas. Ramcharitmanas is a sacred text, which relates the glory of Ram in a dialect that is close to Hindi and easier to understand as compared to Sanskrit. The text was written so that even a commoner would learn about the glory and greatness of ‘maryada purushottam’ Lord Ram. Ramlila presents various episodes in Lord Ram’s life, his trials and tribulations and his eventual victory over Ravan, the king of demons.

In ancient time, during the performance of Ramlila, shlokas were recited backstage while actors mimicked on stage. Today, Ramlila is enacted in a series of scenes that includes song, narration, recital and dialogue. There are interludes between the scenes as well, which gives the actors time to prepare for the next scene. There are various Ramlila styles prevalent across the country. First is the pantomimic style with predominance of `jhankis` (tableaux pageants), second, the dialogue-based style with multi-local staging, third, the operatic style based on musical elements from the folk operas of the region and finally, the Ramlila performed by “mandalis” (professional troupes).

Ramlila is performed across India but most representative Ramlilas are organised in Northern India at Ayodhya, Ramnagar and Benares, Vrindavan, Almora, Sattna and Madhubani.

The Ramnagar Ramlila(at Varanasi) is enacted in the traditional style that lasts for almost a month. Hundreds of Sadhus called the `Ramayanis` visit Ramnagar especially to watch and recite the Ramayana. Interestingly at Ramnagar, unlike anywhere else, Ramlila is performed on multiple sets. Special structures are built at various places in the town to represent different settings like Panchvati, Ashok Vatika or Lanka. The locale changes with every episode and the audience along with the actors shift to the new setting. Another remarkable aspect of Ramnagar’s Ramlila is that it is untouched by technology. Treatment of the stage is sober without the use of electric lights, mikes or loud-speakers. Yet, spectacle is created with costumes, jewellery and performance. The glory of Lord Ram is portrayed with such intensity on stage that it brings tears to the eyes of spectators.

In small villages and towns of Northern India , Ramlila is performed in a makeshift open-air theater at night. It is usually staged by the residents of the area. The environment is festive and the spectators freely whistle and cheer with the proceedings of the drama. Often a singer or a priest in the backstage recites relevant verses from Ramayana, to present scene-changes or at crucial moments of the story. Drummers and other musicians support the actors. Usually the role of female characters is performed by men disguised as women.

There is direct participation of the audience and interludes serve well to showcase impromptu talent of the residents. Ramlila culminates with Dussehra, when Ravan’s effigy is burnt and everyone celebrates the victory of good over evil. The Saraiharkhu Ramlila is worth mentioning here. A village situated in Jaunpur, Uttar Pradesh, Saraiharkhu is famous for Ramlila and a large fair is organized here on Durga Puja eve by “Shri Sitaram Dharm Mandal”, a Bhakti organization.

Mishaps, faux pas, blunders, comedy of errors are an intrinsic part of Ramlila. One hears of so many comic blunders during Ramlila enactment. According to a popular story, once a bulky actor posed as Hanuman got too carried away by his role. In the Ashok vatika scene, he jumped heavily on the stage in front of Sita, declaring that he was Lord Ram’s messenger. The stage was not strong to support his heavy frame, it broke and Hanuman and Sita had a great fall! Backstage happenings are equally entertaining, one can see actors posed as Ravan and Sita sharing a bidi, Ram and Meghnad chatting over a cup of tea, Hanuman looking for his tail, which has gone missing since the last performance.

One often wonders about the enduring popularity of Ramlila. What makes Lord Ram’s saga so appealing that it has not lost its popularity even today? What makes it relevant across the ages? Perhaps the greatness and timelessness of Lord Ram’s character, spontaneity in performance, spectacle created on stage, eager participation and unity of everyone involved has led to its enduring appeal. Moreover, there is the unparalleled storyline based on Ramayana, which has moved Indians for generations! X 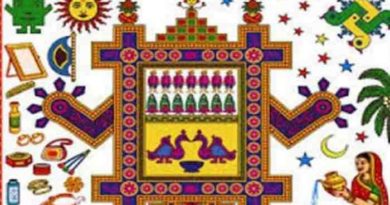 Head of the Mokshayatan Yog Sansthan