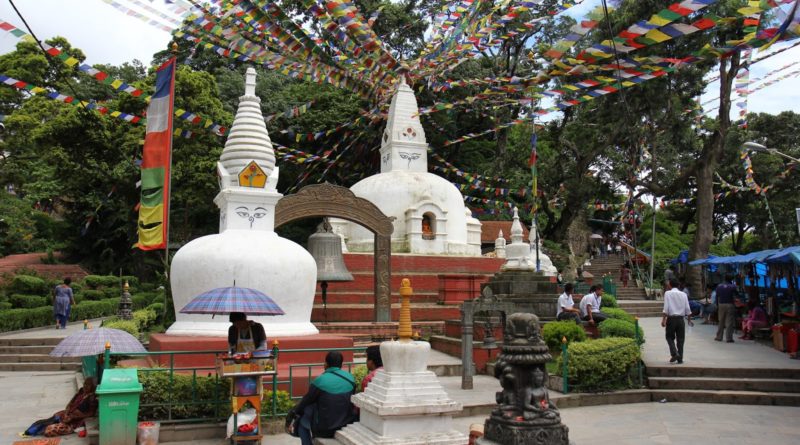 Swayambhunath ; Swayambhunath Stupa, Kathmandu ; PLACE OF PEACE & POWER Swayambhu is an ancient religious architecture atop a hill in the Kathmandu Valley, west of Kathmandu city. The Tibetan name for the site means ‘Sublime Trees’, for the many varieties of trees found on the hill.
There are thousands of religious practices around the world, and for many religions, houses of worship are built. Temples are constructed as a place for prayer, meditation, sacrifice, and other spiritual activities.
Wat Benchamabophit- Bangkok
Also known as “The Marble Temple,” the Benchamabophit is a unique Buddhist temple designed out of Italian Marble. The temple is a major tourist attraction used for meditation and features exhibits such as international Buddha’s surrounding the courtyard.
Lotus Temple- India
The Lotus Temple, located in New Delhi, is a Bahai house of worship but it is open to all, regardless of religion. It was designed to look like a lotus blossom with 27 “petals” arranged around it and has received a lot of attention due to its fine art and architecture. Enter Lotus through one of their nine doors and walk into a hall that’s more than 40 meters tall.
Wat Rong Khun- Thailand
Also known as the “White Temple,” Wat Rong Khun has been open to visitors since 1997 and is owned by Chalermchai Kositpipat, the man who designed and constructed it. The main building of the temple is the ubosot (the ordination hall), and you must cross a bridge to get there. The bridge represents happiness and “the cycle of rebirth.”
Kotoku-in Temple- Japan
The Kotoku-in Temple is known for its giant statue of Buddha, one of Japan’s world famous icons. The structure weighs approximately 93 tons and is 43.8 feet tall. Visitors have the opportunity to gain internal peace as they view the inside. Also, Buddhists from all over the world travel to the Kotoku-in Temple just to pay their respects.
Hawaii Temple- Keneohe, Hawaii
Also known as the Byodo-In Temple, this Hawaiian temple is located in Temples Memorial Park. It is red and white on the outside and surrounded by a large reflecting pool and waterfalls. The temple welcomes people of all faiths to meditate, worship and simply enjoy the magnificence. Fun Fact: Hawaiians often use the surrounding grounds for wedding ceremonies.
Nauvoo Illinois Temple- Illinois
Nauvoo Illinois Temple was the second temple constructed by the Church of Jesus Christ of Latter Day Saints. It was built using limestone blocks. The building is 130 feet long, 162 feet high and 90 feet wide.
Golden Temple- India
The Golden Temple is also known as the Harmandir Sahib (Temple of God). It sits in the center of a sacred pool and floats within a walled compound. It was designed to build a place of worship for people of all religions to worship God equally. The Golden Temple consists of three holy trees, memorial plaques and inscriptions of Sikh soldiers who died fighting in both World War I and World War II.
St. Sava Temple- Belgrade, Serbia
The Church of St. Sava is visible from much of the city, and is one of the key features of Belgrade’s skyline. It is a Serbian Orthodox church known to be the largest Orthodox Church in the world. The church can fit up to 10,000 people a time. Fact: The St. Sava Temple has been dedicated to the founder Saint Sava.
The Monkey Temple and Stupa- Nepal
The Monkey Temple is also known as the Swayambhunath, and it’s among the oldest religious sites in Nepal. It is located on the top of a hill surrounded by “sublime trees,” and there are monkeys that live in the northwest parts of the temple. The dome at the base of the temple represents the world and the eyes on the four sides of the main stupa represent wisdom and compassion.
Sri Siva Subrahmaniya Swami Temple- Fiji
This temple is the largest Hindu temple in the Southern Hemisphere. It is dressed with a colorful design and impressive architecture. Make sure you remove your shoes and dress appropriately. Photosare forbidden inside the temple, but you can take as many as you would like on the outside grounds.
Garni Temple- Armenia
The Garni Temple sits on the edge of a triangular cliff and encompasses the style of classical Ancient Greek architecture. It is a major tourist attraction and has been listed as a UNESCO World Heritage spot. The temple holds occasional concerts on the square right out front.
Temple of Heaven- Beijing
Built in the 14th century, the Temple of Heaven symbolizes the relationship between the human world and God’s world, earth and heaven. According to Travel China Guide, “it is China’s largest and most representative existing masterpiece among China’s ancient sacrificial buildings.” Its yard is a frequently visited spot for those who practice meditation.
Medinet Habu- Egypt
The Medinet Habu Temple contains approximately 75,347 sq ft. of decorated wall reliefs. In ancient times it was known as Djanet, the place where Amun first appeared. According to Discovering Egypt, “both Hatshepsut and Tuthmosis III built a temple dedicated to Amun here and Later Rameses III constructed his larger memorial temple on the site.”
Temple of Confucius- China
According to Travel China Guide, the ”‘Temple of Confucius in Beijing is the place where people paid homage to Confucius during the Yuan Dynasty (1271-1368), Ming Dynasty (1368-1644) and Qing Dynasty (1644-1911).” The temple has four courtyards, and a spectacular photo of two flying dragons playing pearl among the clouds.
Temple of Hephaestus- Greece
The Temple of Hephaestus, the Greek god of metal working and craftsmanship, was built about 2,500 years ago and was the first temple in Athens to be made of marble. It has sometimes been referred to as the Theseum, based on the belief it was a hero shrine dedicated to Theseus, the mythological leader of Athens. (Sacred Destinations).

DETAIL REPORT; Swayambhunath Stupa, Kathmandu ; PLACE OF PEACE & POWER
A golden spire crowning a conical wooded hill, Swayambhunath Stupa is the most ancient and enigmatic of all the holy shrines in Kathmandu valley. Its lofty white dome and glittering golden spire are visible for many miles and from all sides of the valley. Historical records found on a stone inscription give evidence that the stupa was already an important Buddhist pilgrimage destination by the 5th century AD. Its origins however, date to a much earlier time, long before the arrival of Buddhism into the valley. A collection of legends about the site, the 15th century Swayambhu Purana, tells of a miraculous lotus, planted by a past Buddha, which blossomed from the lake that once covered Kathmandu valley. The lotus mysteriously radiated a brilliant light, and the name of the place came to be Swayambhu, meaning ‘Self-Created or Self-Existent’. Saints, sages and divinities traveled to the lake to venerate this miraculous light for its power in granting enlightenment. During this time, the Bodhisatva Manjushri was meditating at the sacred mountain of Wu Tai Shan and had a vision of the dazzling Swayambhu light. Manjushri flew across the mountains of China and Tibet upon his blue lion to worship the lotus. Deeply impressed by the power of the radiant light, Manjushri felt that if the water were drained out of the lake Swayambhu would become more easily accessible to human pilgrims. With a great sword Manjushri cut a gorge in the mountains surrounding the lake. The water, draining away, left the valley of present day Kathmandu. The lotus was then transformed into a hill and the light became the Swayabhunath Stupa.
Swayambhunath’s worshippers include Hindus, Vajrayana Buddhists of northern Nepal and Tibet, and the Newari Buddhists of central and southern Nepal. Each morning before dawn, hundreds of pilgrims will ascend the 365 steps that lead up the hill, file past the gilded Vajra (Tibetan: Dorje) and two lions guarding the entrance, and begin a series of clockwise circumambulations of the stupa (Newari Buddhists circle in the opposite, counterclockwise direction). On each of the four sides of the main stupa there are a pair of big eyes. These eyes are symbolic of God’s all-seeing perspective. There is no nose between the eyes but rather a representation of the number one in the Nepali alphabet, signifying that the single way to enlightenment is through the Buddhist path. Above each pair of eyes is another eye, the third eye, signifying the wisdom of looking within. No ears are shown because it is said the Buddha is not interested in hearing prayers in praise of him.
The area surrounding the stupa is filled with chaityas, temples, painted images of deities and numerous other religious objects. There are many small shrines with statues of Tantric and shamanistic deities, prayer wheels for the Tibetan Buddhists, Shiva lingams (now disguised as Buddhist chaityas and decorated with the faces of the the Dhyani Buddhas), and a popular Hindu temple dedicated to Harati, the Goddess of smallpox and other epidemics.The presence of the Harati Devi temple signifies the intermingling of the pantheons of Hinduism and Buddhism in the development of the religious trends of Nepal. As Buddhists had no deity in their own pantheon to protect against the dreaded smallpox, they adopted the Hindu deity for assistance.
Atop Swayambhunath hill is another fascinating, though smaller and less visited temple. This is Shantipur, the ‘Place of Peace’, inside of which, in a secret, always locked, underground chamber lives the 8th century Tantric master Shantikar Acharya. Practising meditation techniques which have preserved his life for uncounted centuries, he is a great esoteric magician who has complete power over the weather. When the valley of Kathmandu is threatened by drought, the King of Nepal must enter the underground chamber to get a secret mandala from Shantikar. Soon after the mandala is brought outside and shown to the sky, rain begins to fall. Frescoes painted on the inside temple walls depict when last this occurred in 1658. The small temple has a powerful atmosphere; it is mysterious, stern and slightly ominous.
Swayambhunath stupa is also called the `Monkey Temple’ because of the many hundreds of monkeys who scamper about the temple at night after the pilgrims and priests have departed. Nearby the Swayambhunath hill are other important temples such as the Shiva Jyotir Linga temple of Pashupatinath, Boudhanath stupa, Changu Narayan, Dakshinkali, and Budhanilkantha. Readers interested in studying the sacred sites of the Kathmandu valley in detail are referred to the works of Bubriski, Majupuria and Moran listed in the bibliography. 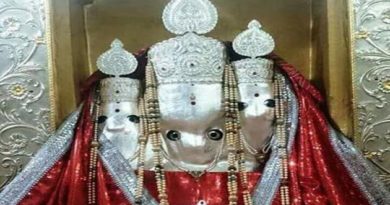 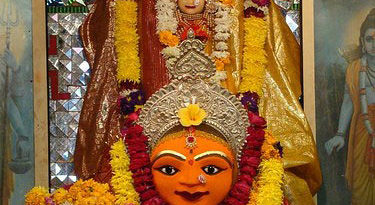